Posted by mathewrobson on May 13, 2013
Posted in: Reviews. Leave a comment

After the success of their 2012 EP We Were Always Electric, May sees the release of their blasting new double-A side single Brave and The Comet, released by Platform Records. Smashing back onto the scene, the new single continues the reputation of the band not only as a talented and energetic live act but also as budding recording artists, whose new work is a flourish of sound.

Unable to agree on a single track, they decided to release an AA single, with the band agreeing that this is their strongest work yet. “We now have two tracks that are completely different,” shares Gary Burns (bass and vocals), “which is awesome as we wanted to see where we could take this new batch of songs and do something you maybe wouldn’t expect from Dead Sea Souls.” 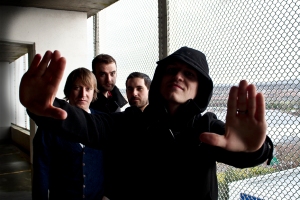 As a single, ‘Brave’ is a fantastic piece; melodic, exciting with inspirational lyrics. With its unassuming opening underlined with haunting guitar, Gary’s unmistakably Scottish-tinged vocals build suspense to the ambient first chorus, with drums and guitars joining to fill the sound perfectly. A song to jump around to, it’s reminiscent of bands such as The Killers and Twin Atlantic; a modern soft-rock/pop sound. An uplifting piece, its lyrics: “Be as bold as you can/There’s no room for a worried man/In this life that you lead,” are fitted perfectly with decisive drumming from David Clark and a technical accuracy in the playing of both James Sweeney and Colin Sneddon. A full sound, with breath-taking freshness; a summer tune.

In contrast, ‘The Comet’ is described by the band as a “cautionary tale of a loved one’s

unbridled hedonism,” it is a definitive piece and particularly impressive. The structure of the piece, with complex rhythms this piece is not only catchy but musically accomplished. With some spectacularly impressive playing from James and Colin, the piece brings the lyrics, “you live your life like a comet/Just waiting to crash/Punching holes through my head/Like the crust of the earth” to life. The piece literally punches a hole … in your soul, and as the single draws to a close your spirit longs for a repeat.

Dead Sea Souls as they say do not “put their faith into coincidences”; their hard work is testament to hard-work and talented musicians. And I am “waiting [for them] to crash” on to a stage near me soon.

The Arkhamists- Eject the Reject

Posted by mathewrobson on May 13, 2013
Posted in: Reviews. Leave a comment

The Arkhamists hail from the corners of the Midlands and have fused together to become a hard-hitting collaboration of sound. A three-piece comprised of Dan (guitar / vocals), Joe (bass) and Baden (drums/ vocals), they are raging into venues as well as taking the studio by storm. Bringing it all together in their album, ‘Eject the Reject’ is a triumph of modern grunge, exuding the talent these three possess.

Opening with ‘Static Nothing’, this band is contrastingly full of vigour. Its howling beginning soon patters into an eruption of sound, detonating grungy bass and some strong vocals from front-man Dan. A strong start to the album with its decisive beats, it resonates a modern Nirvana. An enjoyable piece that leads directly into ‘Suzy Sells Aeroplanes’, with its screaming start it’s an upbeat, energetic track; exciting and mosh-pit worthy. Moving swiftly into ‘Dull Fate, Doll Face’ we see another vocally secure number with fantastic guitar and bass raging through the speakers; the guitar solo is immense. Even three songs into the album, they are blowing the cobwebs out of the grunge scene and replacing it with pure, unadulterated awesomeness.

‘Mirror’, the next song on the album, takes the tempo down with its funky guitar riffs and soft beats. The piece still carries a clear Arkhamists vibe, its contemplative tone is reflected in the lyrics, “let’s have another chance / let’s make it last;” melancholic with a fortitude lacking self-pity. Far away from a whiny song, it reminds me of Staind; a quality lower-key piece with some stunningly full bass sounds that carry the song through. A definitive number on the album, clearly showing the full range of the band’s capabilities.

Moving then into ‘Silent Riot’ (as far from silent as you can come with heavy instrumentals meeting a growly vocal) and converting into ‘Underground’ (a piece that is so full of sound and heavy that you don’t realise that it is actually quite slow paced) the album continues with the endurance we’ve come to associate with The Arkhamists. The next number ‘En Guarde’ is another brilliantly paced track with its blend of rock and some punk bleeding through. The harmonies add an extra edge to this piece and the guitar is determinedly accurate and intricate once again. A memorable song with a catchy chorus and a magical guitar solo mimicked in the bassist’s genius. Nothing short of remarkable.

An excitable first half to the album is split up by the slow paced and thoughtful ‘Turnaround’. With a steady backing from the rhythm section, the vocals come to life with crystallising clarity, the concept of the song being something that each of us can relate to: “Waiting for the day it’ll turn round”. A beautiful number that catches you unawares with its sensitivity.

The final pieces of the album ‘Lion the Tiger’ and ‘Windows like Eyes’ return the band to their former grunge-fuelled rage. Two influential pieces with some stunning harmonies and fast-paced, hard-hitting beats, they leave the listener with their riffs firmly implanted in their brains almost by force. To say that the band has metaphorically ejected the album and begun beating you with it is no exaggeration; but it is meant in a positive way. Their sound is full, strong and morphs the quintessential features of contemporary grunge rock into something new, pure and fantastically entertaining. With their riffs and lyrics etched on your soul, come the end of the album eject and reject are not in your vocabulary. If The Arkhamists be the sound of modern grunge, play on my friend.

Rosa, We Used To Call This Summer, The Antics and The Dead Sea Souls

Posted by mathewrobson on May 13, 2013
Posted in: Gigs. Leave a comment

Rosa catches up with We Used To Call This Summer, The Antics and rising band- Dead Sea Souls.

We Used To Call This Summer

Indie Pop band with a lot of edge. These guys were first on the bill at King Tuts and they didn’t disappoint. With catchy songs and a happy go lucky attitude, these guys were pulling people in. I always feel a bit sorry for bands who are first on stage because the crowd don’t usually come in until later; but this band had at least a fair few people in. We Used To Call This Summer named themselves after a feeling you had when you were young about being carefree and this feeling is carried across in their songs and lyrics and bass riffs which are really catchy and have you gripped. I reckon this band have just started on a bigger path for themselves!

A band from the Midlands, they had to travel for about 8 hours just to get to Glasgow. Although probably being travel sick or least feeling the affects of long trip here, they were a lovely bunch. Gaz, the lead singer, gave me a really informative and great interview just such time and patience for me. When it was time for The Antics to come on stage King Tuts was filling up nicely. Their sound is rock and pop-y and just want to make you dance. They certainly had the crowd going. The Antics like to write and play songs which are about good times and this definitely was a great time to see them play. I really hope to see them again because they bring their all.

These guys are amazing every time I see them live. This was them finally hitting big stakes at King Tut’s in Glasgow. Dead Sea Souls were being filmed by a big production company called Rising Edge. The nerves didn’t seem to affect the guys although they were a bit awkward in front of the camera introducing themselves though which they probably haven’t much to camera they still managed to joke and have a laugh through it. On stage they didn’t disappoint, King Tuts was completely sold out for Dead Sea Souls. I was basically squished up against the barriers, I should’ve just asked to be in the pits. Anyway, I throughly enjoyed the energy and buzz the crowd and DSS brought to the room. These guys I haven’t seen play as well as they did this night they were on fire, nothing seemed taken back, they gave it their all. You could tell that they were enjoying themselves and just throwing themselves into the music. Dead Sea Souls, I’d like to say thank you for the best gig ever of yours it’ll be up on my favorite gigs list. If you haven’t been to a gig of theirs go now the crowd is completely crazy but have much love for Dead Sea Souls music. For me Dead Sea Souls will always be Electric!